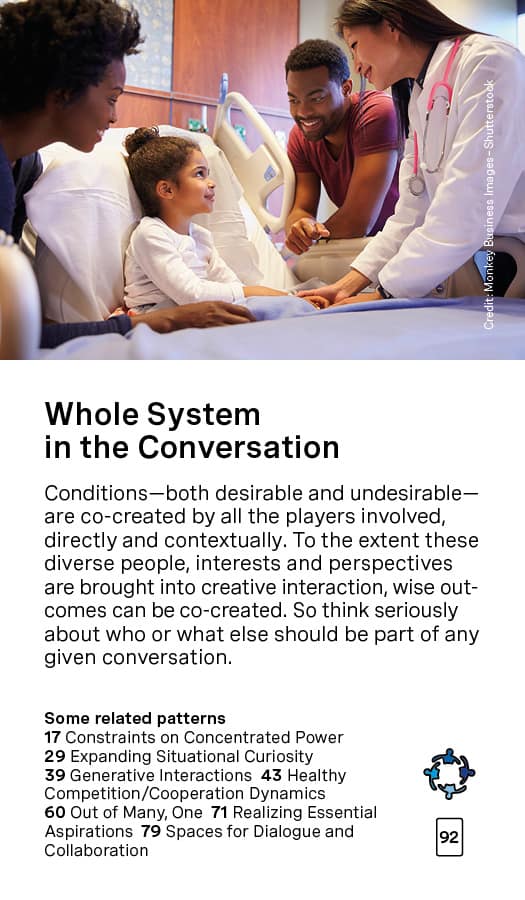 Whole System in the Conversation

The child takes part in discussing her situation. The more people in the room who are part of her system the better. Credit:  Monkey Business Images – Shutterstock

Conditions — both desirable and undesirable — are co-created by all the players involved, directly and contextually. To the extent these diverse people, interests and perspectives are brought into creative interaction, wise outcomes can be co-created. So think seriously about who or what else should be part of any given conversation.

The key question here is “Do we have the people we need in order to bring into the conversation all the relevant systemic perspectives and factors we need to consider in order to work through this issue?”

An issue is by definition a conflict of some sort, some topic that involves some people wanting this and others wanting that, and they are arguing over it. The scene or problem exists because everybody is co-creating some piece of it and those pieces don’t fit together.

The whole purpose of conversation in this case is to figure out what to create together, that will actually fit together. We are going from undesirable conditions to desirable conditions, and we are trying to move from a competitive mode to a collaborative mode. (But notice that even competition is co-created! There’s a funny way in which competition is very cooperative: people are creating the competition together!)

We’re trying to create something that we all agree is a good idea. So we need to find out who’s involved in creating the actual conflict and who is around the conflict creating the context for how it unfolds. There are some players and powers that can shape which way the conflict goes, who have to be dealt with by the players who are more directly involved.

Things like the weather and the economy can also be contexts and there may be players involved in such larger factors whom we want to engage.  So we want to be thinking in terms of all the different forces that are involved and who is involved with those forces.

Diverse people have diverse interests and some people want this, some people want that. There may be universal needs that everyone shares, but people manifest them in different ways and in different relation to each other. People can say “For me in this situation this need is more important than that need, etc.“ How that plays out is different for everybody and they are all looking at the conflict and possible outcomes from different angles.

So how can we bring all this into creative interaction? If we can do that, then we’ll start covering more of the factors that are involved and will be rearranging the energies in the issue into configurations that will be wiser, that will actually have outcomes that serve everybody.

As you do a conversation, it is important to keep this question in mind:  “Who else should be part of it?” You may perceive partway through the process – from what people are saying – that somebody else should be present. So who exactly would that be? And how can you appropriately involve them?

There are various approaches useful for including the right mix of people.  But that’s the general idea, that we are getting into co-creativity and we want the whole system involved co-creating something positive here by different parts of the system talking to each other in ways that can take into account what needs to be taken into account to generate positive outcomes.

Future Search brings together dozens of very consciously selected stakeholders to review their shared past and present and to envision a future they can all buy into, and then they split up into working groups to work for that vision.  This whole-system conversation lends itself to stakeholders thinking about the future.

Open Space and World Café can be used for whole-system work if we consciously bring the full spectrum of stakeholders into the conversation. These are really successful way to engage them in creating new approaches and activities.

Joanna Macy’s Council of All Beings is an interesting one because it’s trying to get all the organisms and the Earth included in the conversation. They are definitely part of most systems and issues, but are seldom included.

Toggle Sliding Bar Area
Page load link
Subscribe To Our Newsletter
We respect your privacy. Your information is safe and will never be shared.