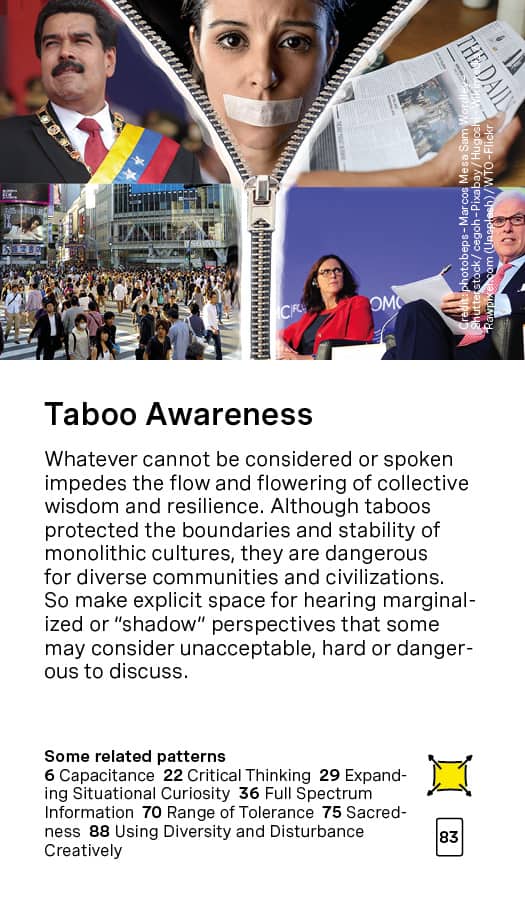 Whatever cannot be considered or spoken impedes the flow and flowering of collective wisdom and resilience. Although taboos protected the boundaries and stability of monolithic cultures, they are dangerous for diverse communities and civilizations. So make explicit space for hearing marginalized or “shadow” perspectives that some may consider unacceptable, hard or dangerous to discuss.

One of the main patterns related to this one is “Full-Spectrum Information”. Basically taboo makes it hard for us to get the full picture. A taboo says: You’re not allowed to talk about this topic, ideally you wouldn’t even think about it. Other taboos say you can’t do this thing or be this way.  Taboo usually has some bad consequences associated with it. If you do talk about it or do it you will be shunned. In some contexts you could be put in prison or killed. God will look down on you or punish you if you do this taboo act or think this taboo thought, if you talk about this taboo subject or say these taboo words, etc.

Making certain thoughts or topics taboo excludes them from due consideration.  Making certain human identities or behaviors taboo can result in the associated people not being part of relevant conversations. Either way, we are probably limiting our ability to take into account what needs to be taken into account for broad long-term benefit.

Now if you are a small isolated culture, you will inevitably evolve certain taboos that help you collectively survive in your situation, in your ecological niche. In this case, taboos are a sort of collective instinct; they’re not necessarily rational but they work, they help you survive as a culture. However, once you become a multicultural, polycultural, pluralistic society, particularly if you have ambitions of being wise and not wiping yourselves out as you develop, you need to be able to get as much full-spectrum information and perspective as you can, and you can’t arbitrarily say that a particular topic cannot be talked about or a certain type of person cannot be included. You need the diversity that arises from open communication.

Individually, you therefore often need to be able to feel what taboo is like for both sides, for all sides. But that’s hard. Like, what for you may be unacceptable, may feel different for your friends, your neighbors, the politicians you hear.  You can FEEL it:  When they talk about X, your insides kind of freeze up and you reject it. You go: “That shouldn’t be said, that shouldn’t be talked about. The way they’re talking about that is evil.“

When you feel that, you know you’re dancing with taboo. But taboo goes the other way, too.  Sometmes you’re in a group that has some people who are kind of different from you, and you can FEEL there’s this thing you can’t talk about, you can’t mention it, and you can feel how the group can’t just sit down and have a sensible conversation about it.  You may even want to leave.  That’s what it feels like to be constrained and shut up by taboo.  Notice how it shuts down open communication.

I suspect that everybody has certain times where they want to reject an idea or want to shut down somebody for even mentioning it or to exclude someone because of who they are.  AND they, themselves, have experienced certain ideas or topics that in various contexts they don’t feel it’s OK to speak about, or aspects of being themselves that they have to hide or that make them unwelcome. They may think about that topic or way of being, but sometimes even that feels bad enough: “I am going to get cursed just because I thought that thought.”

On a personal level this generates its own problems, of course. But that’s less a concern to us than the fact that important things are not brought up for sensible collective reflection.  It limits what can enter into public deliberations, into the shared search for fuller understanding and inclusion. Taboos constrain our ability to take into account what needs to be taken into account. AND taboos are especially prone to manipulation by powerful interests who use their power to make a topic or way of being or thinking taboo – particularly when it has the potential to challenge their power. They can make it unacceptable to talk about that topic or to be that way. It’s actually not that hard to do with modern media, to manipulate groups to exclude, demean, suppress various ideas and people.

I’m not saying that taboos are all bad or forbidden (wouldn’t THAT be ironic!). That’s not what the pattern is about. The pattern is “Taboo AWARENESS“. We need to learn how to notice and counter the dynamics of taboo without making things worse. So there is a dance here.  We’re looking for what kind of information or inclusive space could serve a greater understanding and positive evolution of the situation, could serve the well-being of life in the long run, and what are the energies that allow or disallow those things to show up and be explored in our collective context.  We need to notice that feeling of “I/they can’t talk about it or be that way” in ourselves, our groups and our societies, and to counter it when it interferes with our ability to take into account what needs to be taken into account for long-term broad benefit.

What cannot be said will be wept. – Sappho

Toggle Sliding Bar Area
Subscribe To Our Newsletter
We respect your privacy. Your information is safe and will never be shared.